Chicago-born Erik Matsunaga began his martial journey in the vein of many Midwestern American pre-teens, with folkstyle wrestling as a compulsory facet of public school physical education from grades 6 through 12.

In 1989, at the age of fifteen and inspired by a karate demonstration at Ginza Holiday, the Midwest Buddhist Temple’s annual summer festival of Japanese arts and culture, Matsunaga initiated training in eastern martial arts. Over the course of the ensuing nine years, this path would lead him to the tutelage of instructors Song, Sugiyama, and Nemoto. 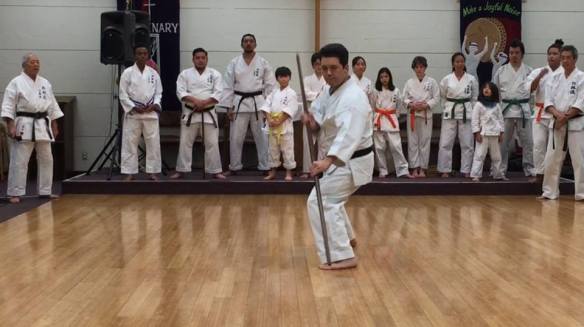 In 1998, upon relocating to California for business, Matsunaga was introduced to the karate dojo of Art Ishii, located in the social hall of a Japanese church in the historic Little Tokyo district of Downtown Los Angeles. It was here that Matsunaga began a new path of training in Matsubayashi Shorin-ryu under Ishii sensei, a longtime student of Eihachi Ota and Takayoshi Nagamine.

Upon returning to Chicago and settling into family and career, in 2012 Matsunaga founded Ravenswood Shorin-ryu Karate Dojo as a community-based group in conjunction with the space-sharing program at Ravenswood Fellowship United Methodist Church. Founded in part by Japanese Americans resettled from WWII incarceration camps (from whom Matsunaga also descends), RFUMC graciously shares its facilities with many outside organizations, supporting both the Ravenswood neighborhood and community-at-large.

Matsunaga maintains an unrelated day job and manages the dojo both out of a passion for the art and as a means to build community through Japanese & Okinawan martial culture. He resides, with his wife and children, on the city’s North Side.

Ananku. 2013.
A raven in Ravenswood. Our dojo mascot.
1999 at Little Tokyo Dojo, Los Angeles, CA. Special guests that evening were Kobayashi sensei of Goju-ryu & Bell sensei of Shotokan. Ishii sensei never hesitated to broaden our scope of karate knowledge through the hosting of guest instructors from different styles. “Regardless of system or style,” he would say, “good karate is good karate.”
It’s not every day you get to witness a 9th dan promotion. WMKA president Taira honors Akamine sensei at Ryu Shin Karate Dojo’s grand opening seminar & celebration. Taira sensei flew in from Okinawa and Akamine sensei from Argentina for Gibson sensei’s event outside Toronto, ON. 2013.
2013 Chicago visit by Ishii sensei from @matsubayashi_ryu_littletokyo in Los Angeles.
Flashback to exchange training with Joe Takehara on October 6, 2014. Takehara sensei was an original member of the Illinois Aikido Club in 1961, the first aikido dojo in the Midwestern U.S., and remains the region’s most senior aikido practitioner.
Loading Comments...
Comment
×
<span>%d</span> bloggers like this: