On November 2, Ravenswood Dojo instructor Erik Matsunaga facilitated a walking tour of Chicago’s historic “unofficial” Japantown in the Lakeview neighborhood of Chicago’s North Side, based on a map he’d developed in 2014 for 30 Years of Lakeview: Chicago’s Japanese American Community, 1960s-1990s, an article published on Discover Nikkei, an online project of the Japanese American National Museum.

The neighborhood was once heavily populated by Japanese Americans mostly resettled from WWII camps as a result of Executive Order 9066, and lasted from roughly the 1960s to the 1990s. A handful of legacy businesses remain scattered about, a couple dating back to the original 1940s WWII-era resettlement enclave of Clark & Division.

Twenty-five Eventbrite tickets sold out, and a couple who could not get tix after selling out said the heck with it and showed up to buy tickets in person anyway! 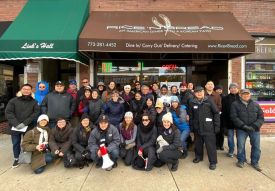 Great turnout for the inaugural event! Group photo in front of the old Hamburger King (today’s Rice’N Bread), in the Links Hall building at 3435 N. Sheffield. Hamburger King was founded in the 1950s by Thomas Yamauchi, and the Link’s Hall building was once owned by Rowland and May Joichi. 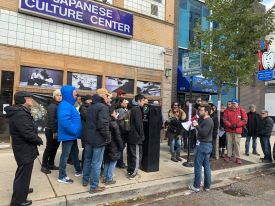 The tour kicked off at the Japanese Culture Center, 1016 W. Belmont, where a representative, Caleb, spoke about the center’s history and programs. Founded in 1978 by the late Fumio Toyoda of Tochigi Japan, it is now in its second generation of family ownership under the leadership of his son, Stephen Tatsuo Toyoda. The elder Toyoda was a well respected aikido sensei and leader of the Aikido Association of America, and the younger Toyoda has taken up the reins as kaicho of the association as a well-regarded teacher in his own right. 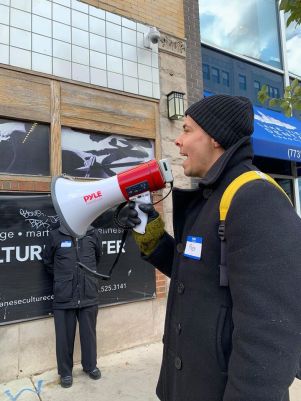 Special guest Fred Sasaki conveys his experience of attending aikido classes at the Japanese Culture Center as a youth: “My father’s solution to bullying,” he recalls. 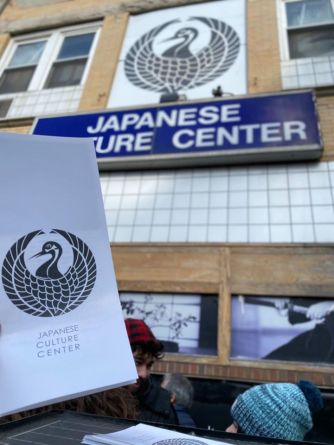 Erik Matsunaga relates the history of J. Toguri Mercantile Co. in front of its former location at 851 W. Belmont, 1st floor. Toguri’s was founded by first generation Issei Jun Toguri, a resettler from Los Angeles by way of Gila River War Relocation Center. Toguri’s was a three generation family Japanese import dry goods shop originally situated in the WWII resettlement enclave of Clark & Division on Chicago’s Near North Side. It followed the community’s migration to Lakeview in 1969, where it anchored the corner of Belmont and Clark until its closing in 2013. From 1972-2013, the 2nd floor loft was occupied by Shojiro Sugiyama’s Japan Karate Association of Chicago. Sugiyama sensei was invited from the association’s Tokyo headquarters in 1963 by Nisei 442 veteran Walter Nakamoto of the Chicago Karate Club. His students currently carry on his legacy at the Japanese Culture Center, down the block. In 1979, Sugiyama sensei invited Yutaka Miyazaki to form a kendo club at his dojo above Toguri Mercantile, which would become Choyokan Kendo Dojo operating today out of Ravenswood Fellowship UMC, University of Illinois at Chicago, and the Dee Park Recreation Center in Des Plaines. 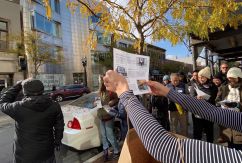 Kat holding up an old photo of J. Toguri Mercantile Co. against the remodeled building.

Joe Takehara, the most senior aikido practitioner in the Midwestern United States and Illinois Martial Arts Hall of Fame inductee, talks about his experiences as a founding member of the Illinois Aikido Club, Chicago’s first dojo dedicated to the Japanese martial art. Initially meeting privately in the matless basement of Chicago Police Detective Anthony Muranaka’s 3-flat at 3324 N. Clark, the small group of Nisei enthusiasts soon after rented a storefront at 3223 N. Clark (Royal Indian Grill) and installed foam flooring to absorb their breakfalls and rolls. Additional to his role in introducing aikido to Chicago, Takehara sensei operated a dental practice up the block at 3355 N. Clark. He continues to teach a Sunday morning class at the Japanese American Service Committee. 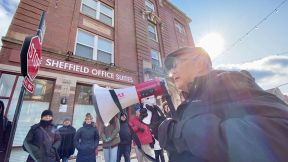 Ross Harano discusses the history of Japanese Americans at Viking Hall, 3257 N. Sheffield, the site of numerous community dances and social activities during the 1960s. The building is a throwback to the neighborhood’s ethnic Scandinavian roots, originally built as Viking Temple by a Swedish social order. In the 1960s it would become home to the Japanese American Service Committee (formerly the Chicago Resettlers Committee at Clark & Division) and the Nisei Ambassadors Drum & Bugle Corps. 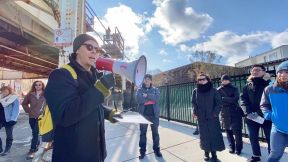 Fred Sasaki relays his experience of growing up in Lakeview, and how the culinary flavors of the many Japanese meals he shared with his father at neighborhood restaurants shaped his identity as a multiracial American of Japanese and Polish descent. Sasaki is well-known among Chicago literati as the founder of The Printers’ Ball, curator of Homeroom’s “101” series, a former page at the Newberry Library, and Art Director at Poetry Magazine. From under the El on the corner of Clark & Roscoe, former home to restaurants Suehiro, Bento, Yamato, Tenkatsu, and Happi Sushi, as well as Star Market Japanese grocery. 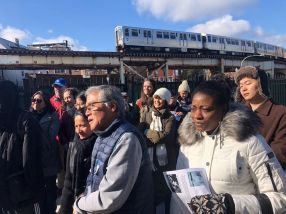 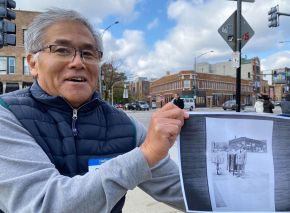 Paul Yamauchi displays a 1960s era photo of his father standing at the same corner of Clark/Sheffield/Newport. His father, Tom, founded the Hamburger King, a fast order grill known for favorites such as Egg Foo Young, Yet Ca Mein, and the original “Akutagawa.” Today it is Korean American owned and called Rice’N Bread, but keeps many of the old King classics on the menu. 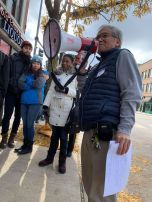 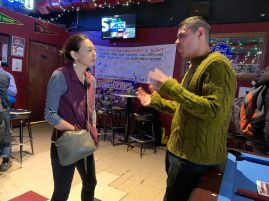 Katherine Nagasawa & Fred Sasaki @ Nisei Lounge, post-tour. The Nisei, Wrigleyville’s oldest dive bar, was founded in the 1940s by Hiroto “Kaunch” Hirabayashi at Clark & Division and later sold to his brother, Kazuo “Zoke” Hirabayashi, who moved the tavern up to Lakeview in the 1950s. They were kind enough to open an hour early on Saturday to accommodate an informal, post-tour meet-and-greet. 3439 N. Sheffield. 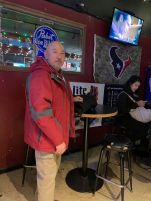 I think Fred blinked first. Ross is an old pro.

Paul was Joe Takehara’s dental patient back in the day and was surprised to run into him on the tour. It was a nice little reunion!

Some advertisements and photos and such offered some additional texture in identifying the community that once was.